By Vicki Thomson
FREE higher education is elitist and it was never “free”. It is past time that was understood. The supposed wonders of that period of “free” education in our universities from 1974 to 1989 keep popping up to pollute the debate on fee deregulation for universities — a debate so critical that its resolution will define the future of higher education for at least two generations.

That debate, and the ongoing negotiations between the government, universities and the Senate, must be able to proceed without the sideline weeping about the loss of this supposed “free education”.

More importantly, the negotiations must be able to proceed with everyone finally accepting that “free” education was never “free” and that those who champion its resurrection — instead of looking at ways to more realistically fund higher education — are advocating a return to an elitist higher education system Australia is well rid of.

In the last year Australia’s higher education was “free”, only 382,725 undergraduate students were enrolled in universities because that was all the federal government was willing to pay for. So, the reality is, “free” was for the lucky few. The low number of student placement caps was absolute, and as demand for places always exceeded supply, Universities were able to cherry pick the very brightest and the best students for their small allowable intake. It was definitely the halcyon days of the few!

This left many aspiring students, even those with what would be classed as reasonably high tertiary entrance qualifications (now ATAR), without the opportunity they deserved of a higher education. That is elitist.

Worse, every taxpayer in Australia was being charged the full amount of a student’s time at university. That is elitist. It took the community cross subsidy to an unconscionably high level.

In 2013, 723,692 undergraduate students attended our universities. Each can accept as many bachelor degree students as it believes it can accommodate. Students pay nothing upfront. On average, the taxpayer pays just 57 per cent. Students pay back 43 per cent of the cost of their degree to the taxpayer only when they reach a salary of $53,345.

The community equity from this system, compared with the era of “free” education, is indisputable. Bemoaning the loss of the “free” elitist form of higher education displays ignorance of what it actually delivered.

Yes, it did open up university to some who would never otherwise of got there. No one is disputing that. But the cost to every taxpayer was unsustainable — even with the small student numbers benefiting.

Meanwhile the cost to the nation was immense, as our economy was denied the contribution of those who could have contributed far more to it through a higher education, and instead were unable to access it “free”.

It was Bob Hawke’s Labor government which had the courage to recognise that the Whitlam legacy of “free” education could not continue, not financially for the taxpayer, and definitely not without continuing to lock out large numbers of future graduates the nation needed.

The release of cabinet papers from 1988-1989 on January 1 this year illustrated that Bob Hawke and his education minister John Dawkins researched community support for higher education fees by which “the domestic beneficiaries of higher education would contribute directly to its cost, subject to capacity to pay” and which would “redress the ‘skewed social mix’ of higher education”.

To hear some in political circles extol the virtues of “free” education is to listen to those who have the luxury of never having to deliver any policy or answer for any policy deficiencies. It is populist politics at its worst. Glib uninformed comments have no part in the urgent higher education funding negotiations of 2015.

Of course free education sounds good. But there was really a very hefty price to pay to deliver so much for so few from that Whitlam decision.

Today the problems universities face are very different. We are faced with funding more students than we can afford to educate. Much must be redefined to ensure those who have the ability to graduate and contribute to society all have the right to a higher education of their choice, and that universities can fund a quality education for them.

Universities don’t ever want to return to the elite days of the so-called “free” education for a few with strictly capped student numbers. It would be helpful if those who advocate a “free” for all actually understood what they were asking for. 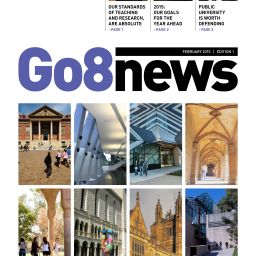 In the media: Universities ramp up offers to lowest tier