his retirement early next year.

Go8 Chief Executive, Vicki Thomson said Professor Bebbington has been a tireless advocate for a university

sector where able students can always enter and succeed, whatever their economic circumstances.

“This in part has been driven by Professor Bebbington’s own experiences, which he wrote about recently for

the Group of Eight.”

Describing his first visit to a university as a child, he noted that ‘As a child from a labourer’s family with no

background of university study, it made an indelible impression on me, and sowed in my mind the first seed of

awareness of what a university symbolised.”

in his role as a Board member of Universities Australia,” Ms Thomson said.

Interim Vice-Chancellor from 1 May 2017. 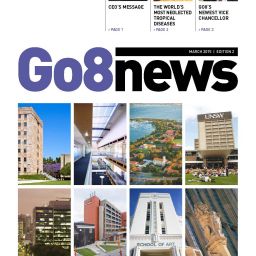