“We are also at the forefront of leading Australia’s participation in key international research infrastructure endeavours, such as the Giant Magellan Telescope and the European Molecular Biological Laboratory.

‘It is not simply our publicly funded researchers, including from our universities, who will welcome the Government’s direction, but our Australian industry which benefits in myriad ways from engaging with or using the work of our national research infrastructure facilities.

“Internationally, the Research Infrastructure Roadmap, together with investment of $1.9 billion over the next 12 years will be welcomed as a strong signal of Australia’s capacity as a research nation.

“We are however disappointed that the Plan fails to establish an independent, advisory body to the Government as recommended by the Group of Eight and in the National Research Infrastructure Roadmap but we do recognise the Government’s commitment to seek advice from ‘relevant experts.’”

Meanwhile, the Investment plan and associated funding does provide a level of certainty for Australia’s 40,000 researchers and others to continue their vital work and for the facilities themselves which employ currently nearly 2000 technical experts, researchers and facility managers.

“We look forward to working with Government in taking this important plan through, including through over half of the NCRIS network currently led by the Go8,” Ms Thomson said. 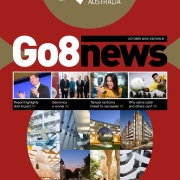 In the media: Melbourne University vice chancellor Glyn Davis on funds, freedom and his future