SELECT COMMITTEE ON THE FUTURE OF WORK AND WORKERS

Senate Select Committee on the Future of Work and Workers

Thank you for the invitation to appear before you.

The future of the students we enrol and graduate is front and centre for the Group of Eight universities.

It always has been.

And this current period of concern about disruption, and how we will manage employment and employability through it, and into what is probably too often loosely labelled the ‘new economy’, is taken seriously by the Go8.

I say that, because the Go8, as Australia’s eight leading research-intensive universities, provides the nation’s economy with 96,000 eminently employable quality young graduates every year.

So, I would like to preface my specific comments with some context relevant to the Committee’s deliberations.

First, we know that the market-place our students are graduating into, is far from the welcoming market-place of a generation ago.

Full time employment rates for graduates measured at four months after graduation have been on the decline since the GFC.

We also recognise that, as a result of the Demand Driven System, there is an historically high number of Australian graduates moving into the hardest graduate market in more than 25 years.

On a more positive note, we also know that while there have been headlines that graduates are not sufficiently equipped for the workforce………………

…….. that assertion is contradicted by data available on the Government’s own Quality Indicators in Learning and Teaching website, known as QILT.

Well over 80 per cent satisfaction in fact.

At the Go8, a higher proportion of our graduates do choose to continue on to post graduate study – Masters and PhD – than from other university groupings.  In fact, while 21.6% of graduates in the sector go on to further full-time study; for Go8 graduates it averages over 30% and is as high as 52%.

In fact, as an aside, the Go8 delivers more than 50 per cent of all Australia’s PhD completions.

This obviously makes it harder to categorise positive Go8 graduate outcomes if they are to be judged only as immediate employment because each year many of our most talented graduates are not competing in the labor market for full time employment with good reason –  they are continuing on to advanced levels of study.

I wanted to stress for you, that it’s most definitely not all negative “out there” but, clearly there is much that can be done to ensure universities can better manage future planning on behalf of our students.

And I sincerely hope the recommendations of this Committee will reflect that.

I do also want to make an observation that is extremely important to the ethos of the Go8.

The Go8 would always state that our role is ensuring our graduates are employable as opposed to employed.

This is critical in a workforce that is likely to be characterised by change and disruption for some time to come.

Too narrow a fixation on simplistic outcomes – such as that a law degree is somehow wasted unless you gain employment as a lawyer – misses the fact that the best way to manage continual change and disruption is to learn how to adapt your skills and knowledge to be effective in a variety of different environments and contexts.

Who could deny the value of a legally-trained professional to employers working in contract negotiations, conveyancing, policy analysis, industrial relations, retail and management, for example? It would be ridiculous to claim these graduates’ talents are somehow being wasted just because they don’t have the word “solicitor” on their business card.

We are proud that employers say our graduates are the most sought-after in Australia, but we also recognise that this is a rapidly changing world and that our graduates will need to thrive in an environment that their grandparents could not have imagined.

We know that our graduates are highly employable, but we are not complacent. We understand that young people are entering a global job market that is undergoing radical change.

With technological advancement automating jobs and a globalised workforce driving intense competition for employment, universities must provide their students with the skills they need to thrive in a 21st-century knowledge economy.

More than ever before, graduates depend on their university experiences to succeed and we are not going to let them down.

But our universities have never been simply one-dimensional job factories and nor should they be.

They are far more than that.

As Dr Michael Spence, Vice Chancellor of the University of Sydney has said on previous occasions – ‘our role is to teach students to question respectfully, to disagree well, but also to challenge assumptions and test both themselves and the ideas that they, and others, assume to be true. In short, we will continue to prepare them to live good lives, to make a positive contribution to society and to use their knowledge for the public good.’

We would always want to be universities from which our graduates, and those who continue to post graduate study, can say they learned the hard and soft skills, and gained the knowledge needed, to forge a career pathway that both fulfils them and contributes to society.

The Go8 works hard to have our graduates become valuable members of society, and not necessarily in their undergraduate field of study.

In my own office, for example, I employ three valued staff – all of whom engage in policy analysis, advocacy and strategic thinking – using skills they developed during PhD studies in areas as diverse as musicology, humanities and social science and pure mathematics.

I would also like to reiterate some material that a colleague from UWA did provide to the Committee at an earlier hearing – namely that change has always been with us, and that nations and their universities have always managed to navigate it.

David Norman from UWA quoted from a paper “False alarmism: technological disruption and the US labor market, 1850-2015” which looks at job churn – the number of jobs lost and the number of jobs gained – as an indication of how quickly jobs are changing.

In total it shows that the rate of occupational churn today, is actually at its lowest in that entire period from 1850, and job losses today are half what they were in the 1960s, the 1970s and the 1990s.

– just as we have managed periods of change across all aspects of society – social, industrial, technological – for many hundreds of years.

But I do stress that there is a need to have the right tools to aid that process.

Currently I would assert that the Go8, and the sector more widely, are not well-equipped with the required tools.

Put simply, in Australia there is no longer access to high level strategic advice on employment forecasting. And the question must be asked, why not?

If we are serious about managing employment change, then why would we not have access to such vital information for analysis and policy formulation?

Educators need it. You can only fly blind for so long. Today’s world moves fast, sectors evolve and sectors crash.

A skills shortage can have turned into a skills glut in the years between student enrolment and student graduation.

The Government must re-establish a national capability to provide high level strategic advice on workforce and employment forecasting.

For example, the now-defunct Australian Workforce and Productivity Agency – AWPA – was enabled to undertake research and develop long-term strategy in key areas that informed industry activity and direction.

Such a body is even more critical as we move from a Demand Driven System to a system which reflects the needs of Australia and our economy.

The Go8 submission also mentioned one conundrum that we cannot resolve without this capability.

Namely –  why we have an economy increasingly reliant on STEM skills, with business asking for more STEM graduates, yet STEM graduates showing up as having high rates of underemployment?

STEM underpins a differentiated and readily adaptable economy that is globally competitive and STEM research contributes knowledge to a world that relies on a continuous flow of new ideas and their application.

But we have a disconnect and a significant gap in the productive capacity of the Australian economy.

A significant proportion of these STEM graduates who were in full-time work soon after completing their degrees indicate they are working in jobs that don’t fully utilise their skills or expertise.

There is a clear national policy need to understand the reasons why this is happening.

In another area where we have a significant gap in visibility – there is no single student identifier for all students across all post-secondary education –  indeed the Smith Family has suggested a Unique Student identifier at the school level – as a way to monitor and evaluate educational investments and initiatives.

Educators have been crying out for this.

It’s, to put it bluntly, a no brainer.

The current system across the tertiary sector is so fragmented as to be virtually useless:

Nearly all students in vocational education receive a Unique Student Identifier – A USI.

But of course, there is no real way of tracking a CHESSN against the USI, so we have no reliable way of seeing how aligned our tertiary sector is for students.

With students moving between qualifications and sector levels across a lifetime of learning and without visibility, how can Australia make accurate post-secondary education policy without tapping such a rich stream of data?

It reminds me of a pertinent quote about data – you can have data without information but never information without data.

And because we know we have to look inside our own house also, it ought to be a national priority to have the courage to unpick Australia’s post-school education system with a comprehensive national review.

In this regard, I would never assert too many students enrol in university …….but I would assert that too many students feel pressured by family, school, peers and society in general not to follow their hearts and skill set; and so don’t choose a career pathway invaluable to the economy via the TAFE system.

There is too much pressure on students that they must attend a university.

Indeed, while under the demand driven system undergraduate degree enrolments have grown substantially, important sub-degree programs in vocational and higher education have languished. In 2016 there were 242,000 more people in higher education than if 2008 participation levels had been maintained, with 132,000 fewer additional enrolments in VET.

It is not true that only university entry holds the key to a future career.

TAFE must be returned to a position of value; seen as a respected and much needed partner in post-secondary education, not treated as a lesser education stream.

We must take a good hard look at what is happening and accept there is much that is good, but much that can be better.

To that end there must be a holistic approach to the post-school education system.

The Go8 strongly supports such a national review and hopes that the Committee will come to the same conclusion.

Go8 Media Release: Labor’s statement of intent on a science and research reset is powerful 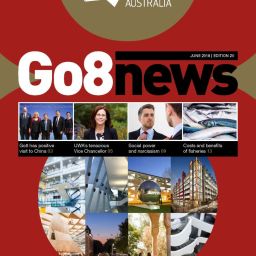