The results of Excellence in Research for Australia (ERA) 2015 have again confirmed the Go8 universities as world leading research institutions and as the top eight research intensive universities in Australia.

The Go8 has increased its number of world leading research groups (ERA rating 5) by 51% from ERA 2012.

The Go8 now has 312 world leading research groups, representing 60% of the total number in Australia

Across all disciplines assessed in ERA 2015, 99% of Go8 research was judged to be at world standard or above.

ERA is conducted by the Australian Research Council to identify and promote excellence across the full spectrum of research activity within Australian higher education institutions.

* for universities with more than one assessed 4-digit Field of Research (FoR).

In particular, ERA results emphasise the Go8 footprint in medical research. The Go8 has six of eight groups nationally at world leading level in the broad (2-digit FoR) field of Medical and Health Sciences.

These Go8 medical research groups also won over 60% of NHMRC funding in 2015. 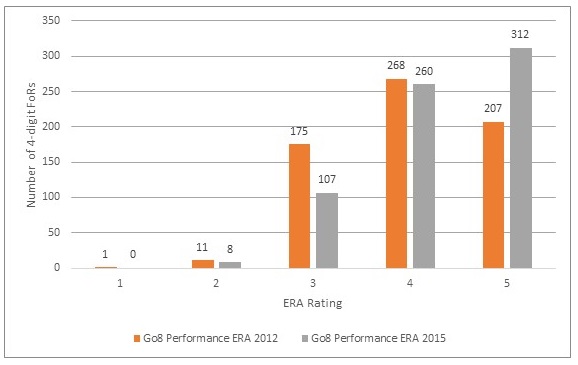 For the complete results for ERA 2015 go to the website of the Australian Research Council (ARC) www.arc.gov.au