The Group of Eight (Go8) has told the Annual Meeting of the “Global Council of Research Intensive Universities”, held in Tokyo, that it is up to the Council (of which the Go8 is a member)  to ensure the value of basic research is communicated to politicians and to the community.

“We are all operating within a fast-changing or confused political agenda and we need the value of basic research better understood,” said Vicki Thomson, Go8 Chief Executive. “I think we can all agree that in this world where instant gratification looms large across all spheres of our daily lives, we must stand up and volubly support basic research.  Bluntly, if we don’t, no-one else will.”

Ms Thomson said that it was prophetic the Council was meeting as Americans vote in their next President. “The UK has just been through Brexit, Europe has its own turmoils and Australia has had five Prime Ministers in under seven years. There is a tangible feel of restlessness.

“It is in this volatile and, too often knee-jerk reactive political and policy climate, that it is up to us to protect the future of basic research. It is research that is most often costly and may not show direct impact  for decades when patience is a short political and community commodity, and the demand for a fast return on investment  is being reflected on global share markets,” she said.

The Go8 invests $3.2 billion annually in applied research and experimental development and our income from industry research is twice that of the rest of the Australian sector combined.

However, Ms Thomson stressed to the Council that the message has to be that basic and applied research are symbiotic. “Applied needs basic,” she said. “To even think that the foundation of applied research – basic research – is too risky, too nebulous, too slow a return on investment is as unjust as it is dangerous to the future of society and to our economies.”

The Global Council of Research Intensive Universities brings together the world’s leading research universities to discuss issues of global significance and the future of research and post graduate education.

In addition to Australia’s Group of Eight, its members include:

In the media: Opinion Editorial: University research repays its state funding in spades 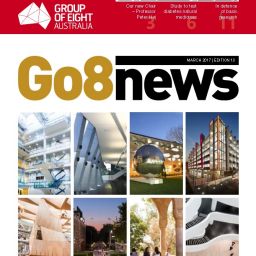