In the media: Opinion Editorial: It’s time to charge a realistic price for uni degrees

Last week, John Dawkins took to pen and paper to call for comprehensive higher education reform. This call is a welcome contribution to an important policy debate that has gone rather quiet of late.

As Minister for Education under the Hawke and Keating governments, Dawkins oversaw the introduction of revolutionary policies such as HECS and an expanded Austudy. He also opened up the system to international students – allowing the higher education sector to develop into our third-largest export industry. Indeed, without the so-called “Dawkins” reforms, our universities (and our economy more generally) would not be as globally competitive as they are today.

This is why, when someone as well versed in higher education policy as Dawkins warns that our current approach to university funding is completely out-dated and in need of an overhaul, the government, opposition and new Senate crossbench should take notice.

As Dawkins himself stresses, the reform agenda he led was never intended to be permanent. It certainly was not expected to provide the bedrock for the diverse, highly globalised, and technology-enabled higher education sector we have today – 30 years later.

Despite successive reviews and numerous attempts at higher education reform over the last decade or more, change has been incremental at best – with little overall coherence or direction.

As the Go8 set out clearly in its Priority Directions paper released during the recent election campaign, we agree wholeheartedly with Dawkins about the need for major (and critically well thought through) reforms to further drive competition, innovation, diversity, fairness and efficiency in the system.

First, they need to rescind the 20 per cent cuts to higher education that remain in the forward estimates.

Third, there needs to be a constructive discussion about the allocation of Commonwealth funding for sub-bachelor, bachelor and masters level courses.

As Dawkins notes, now is a time for action. There is little point conducting another major independent review of the system. The many past reviews, combined with the consultation and costing exercise the government now has under way should provide all the evidence required to develop the necessary reforms.

In the interests of current and future students it is imperative that the government, opposition, and higher education sector engage in constructive dialogue so as to build consensus on the positive and affordable legislative solutions that are achievable during the life of this parliament.

It is encouraging that respected figures such as Dawkins – a former education Minister and Federal Treasurer – are seeking to stimulate and be a part of this dialogue. The Group of Eight looks forward to contributing to the discussion during the coming weeks and months.

In the media: Politics Unis, the battle intensifies

In the media: ‘We’re no drain on the budget’: Vice-chancellors hit out at government fee hikes, funding cuts 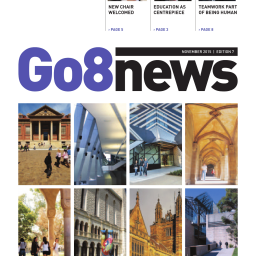